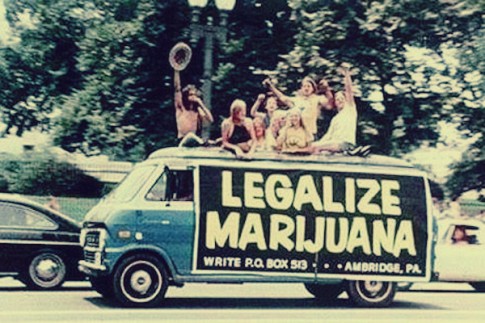 Over the past few months I have been stating that I believe “weed will be legal by summer.” Some have laughed and some have cheered. Others have marginalized this statement as an unproductive “rumor.” So here we are about 75 days from summer and I still believe that things will be very different for weedheads in the near future.

Now when I say “legal by summer” I am not expecting the do-nothing Congress to actually change federal law over the next 75 days. Shit…I cannot expect them to figure out how to fund the government or do the most basic legislative tasks with the unprecedented gridlock we see happening these days. I do not expect for 7-Eleven to be selling weed over the summer, or that weed will be 100% “legal.” That would be terribly naive.

What I do expect to see is a very real and meaningful policy shift from the US Department of Justice, and a definitive statement that effectively ends the unnecessary and overzealous federal enforcement policies in states that have allowed for weed.

I understand the skepticisms that I hear from those who have been “duped” by supposed changes in federal policy before. I know that the Ogden memo gave many false hope, including the entire Colorado legislature that passed their regulations as a result of that policy. But the Ogden memo, as flawed and politically calculated as it was, opened a lot of doors for cannabis laws too. The issue is that when the door opened a crack, we did a poor job of self-policing our industry and the policy was used by many as a free-for-all anything goes opportunity that resulted in some bad behaviors and poor decisions from many in the cannabis community. So it was not surprising when the Cole memo rescinded any statement made in the Ogden memo, and the crackdown began to happen.

But I do not believe that type of wishy-washy policy shift is what we are about to see. Why? Because there is less to lose for the administration right now, Eric Holder is on his way out, and the poll numbers of people who support legalization, and an end to federal interference in state law, are steadily increasing and in some cases are staggering. The Pew Research Center just released a poll that showed that 60% of voters think the Feds should not interfere in states that allow for it and 72% believe enforcement costs more than it is worth; 52% believe it should be outright legalized for adults.

Politicians are creatures of habit and their habit is to go with the flow. The flow is undoubtedly going our way and we see political, social, and legal support for weed growing at astounding rates.

The big and obvious shift were the passage of two adult use legalization bills in Colorado and Washington. The incredible victories were a product of good campaigns, but more so, they are indicative of a major evolution of public opinion since the highly-publicized and discussed 2010 Prop. 19 campaign. I think that campaign began an unstoppable dialogue that has resonated in our society. When 46% of Californians came out to support adult use legalization it was a shot across the bow of prohibition. It showed that we were way closer than anyone had imagined and gave us that light at the end of our long and dark tunnel.

This effort resulted in the Colorado and Washington’s successes, which took the conversation to a whole new level. We were no longer talking about how close we were, but that we had actually arrived. In Colorado, weed got more votes than Obama. That is a hard one to overlook for any politician.

But I think the silence by the administration to this point is telling. In December, Eric Holder was questioned by NPR’s Nina Totenberg about their response to the laws in Colorado and Washington State and after he chuckled about when they might have that response he stated this:

ERIC HOLDER: There are a number of ways in which we have to look at this. The United States, the federal government can’t force a state to criminalize something. So decriminalization has to be viewed with one set of eyes. The structure that might be put in place to take advantage of the sale of marijuana has to be viewed, I think, with another set of eyes. I think we’re going to have to try to determine, with the sets of eyes that we have, what the policy pronouncement we’re going to make with regard to those two components of these new laws.

So it is clear they are considering a policy shift and are recognizing their limitations to enforce state laws. That is an obvious sign to me that they are working on a carefully crafted policy shift to allow states to set their own policy on this issue. If the answer was going to be “Fuck you. We will vigorously enforce the Controlled Substances Act” then that would have been stated early and often, as it has in the past.

But the world has changed…and they know it. The question now is how do they acknowledged that we stepped in shit by prosecuting and jailing people over the years, and walk it back without looking like the gigantic assholes they are for putting people in jail for weed? How can they step back from the wave of changing public opinion and not have to apologize for years of evil policy enforcement? That is the trick. How can they craft a policy that gives freedom to weedheads, growers and distributors with0ut admitting that they have erroneously imprisoned hundreds of thousands of people for weed? It is a conundrum. On top of that, will they need to release prisoners who are in jail for weed crimes? Maybe just the ones from states where their actions are now legal?

Who knows? There are a lot of factors to consider, so it does not surprise me that here we are five months after election day and they have not made any clear statement to date besides Obama saying “We have bigger fish to fry.” Yeah..no shit.

But the reality is that they are considering them…and that will lead to change. What degree of change is hard to predict, but I firmly believe we will see a paradigm shift in federal policy and an opening of the floodgates for states to do as they please on this issue. It does not make sense to continue to throw good money after bad when you are losing support at such a drastic rate. If anything, they will need to give ground if they want to keep any of their silly drug war infrastructure an militarization in place. Things are changing that quick.

We have seen an incredible amount of prominent members of our society come out for legalization lately, and the walls of prohibition continue to crumble. It seems every day there is another figurehead willing to come out in favor of removing criminal laws on marijuana. Look at these recent statements by two ex-presidents:

We could have fighting and killing over cigarettes if we made it a felony to sell a cigarette or smoke one, so we legalize them. If all you do is try to find a police or a military solution to the problem, a lot of people die and it doesn’t solve the problem.

Or this from former president jimmy Carter:

“Putting everybody in prison because they have marijuana is a very major step backward, and it ought to be reversed not only in America but around the world,” he said.

The administration seems to have its hands full these days with a million very hot-button topics. Form chained CPI for Social Security, to drones, to sequestration, to immigration…and the list goes on; there are a lot of issues that the administration may want to distract from. What is a better distraction than legalizing weed? So I would not be surprised to see an extremely calculated policy change that is timed to change the conversation as these other battles heat up. It is how political capital. works.

So when I say LEGAL BY SUMMER, I do believe that over the next 2.5 months this policy will come down the pipe and that it will favor a reduction in weed enforcement. How drastic that may be is anyone’s guess, but I believe it will empower the states to take a more forward role in the issue and allow for decisions to be made by the states in regards to cannabis enforcement or legalization. I think they will still be actively involved in the trafficking of marijuana from state to state, as that is where they can certainly justify their enforcement. But I think the days of raiding state and locally licensed providers of weed are numbered; and in turn, I think we will see a number of states pass laws allowing for weed without the fear of federal enforcement looming.

This will not be a painless transition. Nothing is in this Country. Even the evolution of booze after prohibition was a slow and gradual process. In fact, today is the 75 year anniversary of the day beer resumed flowing after prohibition, as described in this informative article on NPR.

April 7 marks the 75th anniversary of the official beginning of the end for Prohibition. On the date in 1933, legal beer production resumed in the United States, sparking celebration among brewers and imbibers alike. Historian William Rorabaugh, author of Alcoholic Republic, puts the event into historical context….

In 1917, the 18th Amendment established Prohibition, banning “intoxicating liquor,” which it left undefined. Franklin Roosevelt vowed to end Prohibition, but first, he did something easier – he got Congress to declare that beer with 3.2 percent alcoholic content was not an intoxicating liquor. It would take until December 1933 for the 21st Amendment to repeal the 18th. But for eight months, 3.2 beer was the only adult beverage allowed.

So I do expect the process to be a tough and likely timely one…especially in today’s modern political climate. But it is one that will happen none-the-less; and I think it will begin by summer.

This does not mean to abandon all activism and take my word for it. In fact, it means the opposite. It means that the time is here and now. The fight we have been working to get is happening, and we better damned well be ready for it. Sitting on our laurels believing that we have another few years to prepare is a stupid and will result in catastrophe. We must be ready to take destiny into our own hands as soon as the battle begins.

Are you ready for summer?