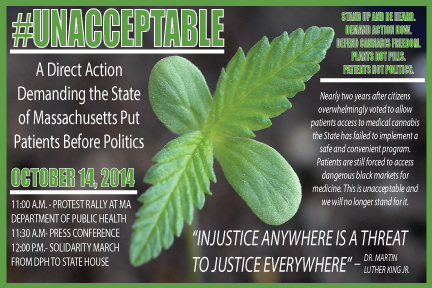 Boston, MA, October 7, 2014 – On November 6, 2012 Massachusetts residents voted overwhelmingly to allow citizens to have access to medical cannabis. Nearly two years later the will of the people has still not been implemented and patients are still forced to go without cannabis medicine, or to seek it out from often dangerous black market sources. It is unacceptable.

The program has been hampered by incompetence and seemingly political positioning. The DPH received millions of dollars in fees to vet applications, and failed to do so. It took media sources reviewing the applications and publicly acknowledging their shortcomings to realize many inconsistencies and politically charged issues. The DPH was forced to delay the program and rescinded nearly half of the original 20 dispensaries that were selected for approval. Because of their inability to review the most basic of issues in the applications, this has resulted in them dragging their feet resulting in thousands of patients being forced to suffer needlessly.

To date, patients still do not even have a simple identification program for law enforcement to verify their patient status. The planned caregiver program is non-existent due to cumbersome and unnecessary regulations. Patients cultivating their own cannabis have no way to know if their gardens are legal or if they are violating the law, as DPH has no guidelines or registration. Dispensary groups approved for the inspection phase continue to be limited by unsure direction and confusion from the DPH. Patients with serious and life-threatening illness are being denied access and are suffering diminished quality of life (and even death) as a result of the State’s failure to implement the program.

This is no longer okay and we demand the Department of Public Health immediately begin to open up the program and allow for patients to access safe and quality cannabis medicines through experienced caregivers able to serve multiple patients; and clean, well-lit dispensary facilities.  We demand DPH limit restrictions on hardship cultivation and allow more patients the opportunity to grow their own safe medicine. We demand the DPH expedite the current dispensary applications waiting for approval, immediately issue permits in counties without access as required by law, and allow for at least 35 dispensaries statewide to serve the needs of the tens of thousands of Mass residents who qualify for medical cannabis. Hundreds of patients and activists will gather on October 14th to make these demands heard at the MA Department of Public Health offices in downtown Boston.

What: #UNACCEPTABLE: A Direct Action demanding the State of Massachusetts put Patients before Politics.

Why: To demand the DPH and state quit putting politics before patients and implement access to medical cannabis immediately. To bring public awareness to a cause that has forced people to suffer needlessly, including children and families dealing with major health issues. To call for immediate change and progress. 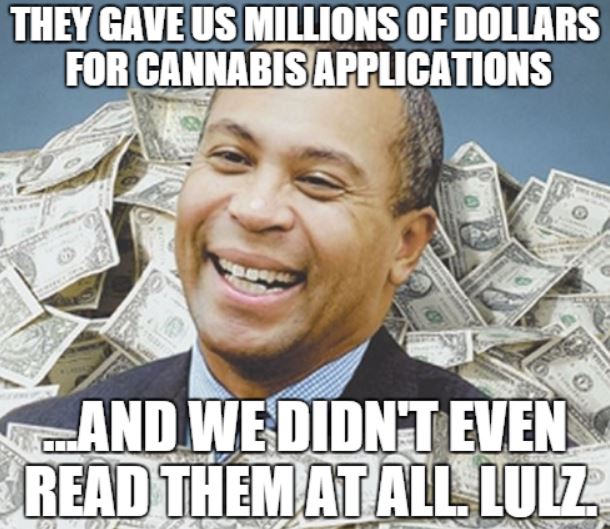