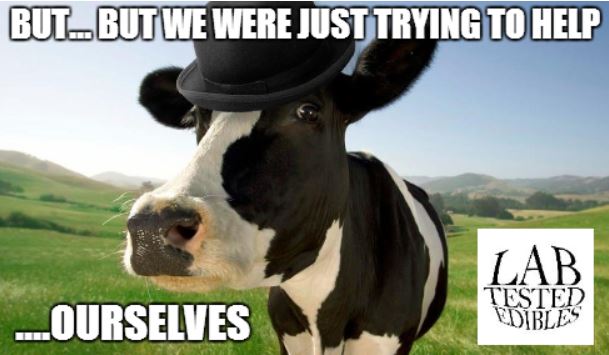 So in April this adorable and seemingly awesome Instagram account popped up that began testing edibles and publicly posting results #FORTHEPATIENTS. This no name anonymous Instagrammer would have you believe that they are just a patient who happens to spend thousands of dollars to get edibles tested so that patents know what they are getting. They go to random dispensaries and purchase products, and out of their own pockets and good heart, spend money for the edible and then to get it tested so that they can bring you “the real results.”

So get this… this whole deal popped up in April, right? Here is a screenshot of their first posting being from April:

But here is a post that was soon deleted from FEBRUARY from the kids at Korova Edibles: 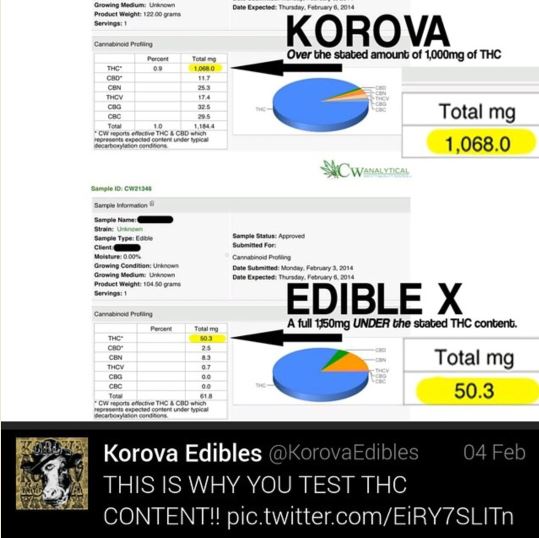 Notice the eerie similarity? Crazy right? Three months before this Dudley Do-Right @lab_tested_edibles Instagram page popped up this highly competitive edible company who is close friends with the owner of CW Analytical labs; and who is in a close knit group of other edible makers looking to gain competitive advantages in the marketplace, Korova edibles had almost an identical comparison model posted on their social media that was removed shortly thereafter? WOW!!!!! What are the chances?

So here is the ruse. Korova Edibles, in conjunction with CW Analytical labs have created this Instagram count to provide a clear competitive advantage for their clients and people who they are in bed with.  They can anonymously post skewed results that discredit some of their bigger competitors and support that the people who are doing business with CW and Korova themselves are the only ones being “truthful” with patients. But it is all bullshit.

Here is a look at some of the edible companies who use CW labs according to the scrolling logos on their own website:

I know it is shocking, but the companies who happen to test with CW as clients edibles were all reported very favorably on the @lab_tested_edibles site, while other companies such as Cheeba Chews and Auntie Dolores (and my own Compassion Edibles) all came in well below listed cannabinoid levels. Hard to believe, right?

So here is how I confirmed my suspicions. Most all of the results on the site are done by CW, with the exception of a few done by Steep Hill. I have a good relationship with the Steep Hill kids, as their co-founder is publicly known as on of my good friends. I notices the results for the Actibliss Syzurup product were done by Steep Hill. Knowing about the Korova posting from February, I took a wild stab in the dark and went on @lab_tested_edibles Instagram page accusing Korova of dropping those samples off at Steep Hill. I never contacted Steep Hill once. Believe it or not, those guys never give me any information because they know the conflict of interest. They actually go out of their way to keep secrets from me because they have a business to run. But I figured if I made an accusation that someone would contact Steep Hill blaming them for telling me who dropped off the samples.

Sure as shit I was right! I get an angry text message from Steep Hill on why their lab was being accused of this shit in public when they had not done anything. The owner of Korova contacted them stating “Is there no confidentiality between lab and client?!?!…. Only employees at Steep Hill lab would know I dropped off these edible samples.” Yes…. I pissed off my friend to elicit a response, and it worked. Luckily my friend is understanding and knows what an asshole I am.

So there is a clear admission that Korova is indeed the one sending edible samples and anonymously posting them under the name @lab_tested_edibles. I never said that they did work at CW. I said they were in bed with CW, the same way Bhang and other edible makers have had relationships with CW that are more than third party verification relationships.

The Instagram account is complete bullshit and is no more valid than other anonymous websites that attempt to malign other companies to promote their own. These sloppy losers should be ashamed of themselves. If you want to pull this off you need to be less obvious whose interests you are serving. It is a pathetic attempt at catfishing and should not be thought of as a credible source.

A truly credible source would post WHO they are making these claims and investing in this grand experiment. They should post TRANSPARENT AND COMPLETE results that can be verified with the labs. They SHOULD NOT be another edible maker and lab that serves edible makers.

The entire overlap between lab companies and the clients they serve is gross and does nothing to serve the end user. CW is not alone in their intermingling with their clients and working to provide advantages for them, but this is a clear and gross misrepresentation of the service that quality assurance testing is supposed to be.

It is deceitful and wrong and the folks at Korova should be ashamed. It is bad enough that your products taste like dogshit. If I wanted to taste that much plant material I would just suck on a tube of RSO. But this is just sad and pathetic.

They should shut down the Instagram page and come up with a better ruse that does not unravel so easily on them. You guys are funny. Not really… but sort of. You are terrible at fraud. Maybe just try making better products?

It is even sadder that CW Analytical is still pulling bullshit schemes like this with losers this late in the game. They do not deserve to be anyone’s lab in the cannabis industry. They are the epitome of what is wrong with lab testing in cannabis and probably one of the reasons that lab testing will be turned over to state authorities sooner or later. 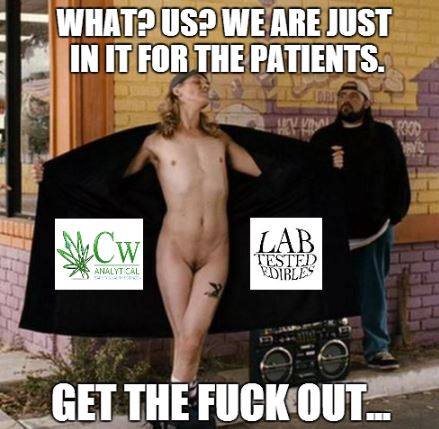 We will take a closer look at what the issue is with edible testing in the near future. For now, let this unsavory business practice and absolute fraud disgust you. There is no place in the cannabis community for overt shady underhanded bullshit like this.