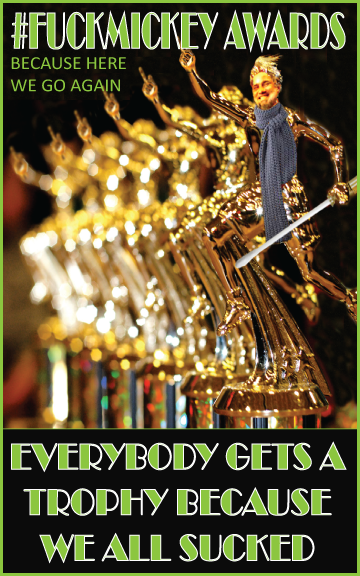 The #FUCKMICKEY Awards are a place where I give awards to: THE GOOD, THE BAD, and THE UGLY of the cannabis movement and industry. Some call it mean-spirited; and others appreciate the willingness to keep it real and have the tough conversations about the mosaic of weirdos, freaks, and chumps that are a part of the community. It has become a fun tradition that, at the very least, gives people something to talk about heading into the New Year. Whether you love or hate the #FUCKMICKEY Awards there is no denying the real and meaningful impact they have had.

The whole awards show started out as a big joke to poke fun at the dozens of unnecessary and stupid awards shows that some weak-ass organizations put on to pat each other on the back; and award the undeserving for menial efforts that are more of a circle jerk than any sort of real award. But I do not have to tell you that. There are nearly 800 yearly cannabis cups and competitions that have watered down the meaning of awards to the point that by now everyone has gotten a stupid trophy for one thing or another… but I digress. In addition to the “I won a cup at blah-blah-blah event” deal, there are also another couple hundred “awards shows” where some nameless committee of losers give out the old reach-around awards to their buddies to give “recognition” to some asshole for doing their fucking job, and usually not even doing it well. Super. Yawn.

So, three years ago, I decided that I would do my own awards based on 3 categories- THE GOOD, THE BAD, and THE UGLY. The individual awards were bizarre by design to illicit humor and to make people think. There was everything from “Best Stupid Selfies” to “Neediest Attention Whore” to “Person Who Should Most Likely Just Die.” You can see how these hard-hitting realities caused a lot of drama and made hundreds of people butthurt. It is funny because it is literally just me sitting at a computer posting meme-based awards regarding my opinion of the many public figures and hucksters that create the cannabis landscape. I spent 137 days in Facebook jail this year, and 97 of those were directly related to last year’s #FUCKMICKEY Awards. Good times.

It is also a hell of a lot of work to pull off. Developing the categories and researching who is the worthiest for each one is exhausting. Then having to write lengthy descriptions for each of the awards and posting them for everyone to read and share takes a lot of time and energy. Add to that the fallout from the barrage of emails, messages, texts, and comments I receive, and it gets to be a lot to manage…. Remember. it is just me. A giant asshole sitting here throwing bombs and watching the chickenheads scatter. It has become quite the undertaking.

So, after the long and trying year that was 2016 it became more difficult to single people out for their fucking problems. We all failed this year when you look at it. There is not a person in this movement and industry that deserves a real pat on the back, or award for anything.

Sure. I could put a bunch of assholes on blast for their crimes against humanity and greed, but why? What purpose would that serve when the reality is that we are all guilty. Guilty of not doing enough. Guilty of being selfish. Guilty of not putting forth the effort needed to change the world. Who the fuck am I to tell this person that they sucked more than me this year? I just do not see the point anymore. I too failed as a human, an activist, and as a protector of cannabis.

It is funny to listen to people bitch and moan because I did not drop the normal #FUCKMICKEY Awards this year. You blood-thirsty bitches should be ashamed of yourselves. Maybe if you grew a sack of nuts and spoke up every once in a while, there wouldn’t even be a need for me to have these stupid awards. But most of you are cowards. Most of the people who expect me to do the work for them wouldn’t know courage if it bit them in the ass. Fuck you guys the most.

But moving on… I am not going to waste my time and energy this year calling out all of these individual fuckheads for their atrocities. I will leave that chore to those who really give a fuck. If 2016 taught me one thing it is that I give a fuck too much. That I let my emotions get the better of me, and I waste valuable time and energy focusing on what is wrong with the world instead of what is right.

I have decided to try and change that. I am trying to figure out how to move forward and to quit looking back so much. No one said that would be an easy task, but it is necessary if I am to grow as a person.

So, the big winner of the #FUCKMICKEY Awards this year is YOU. That is right. Each and every one of you have sucked this year. There is nothing for you to be proud of. We are watching our society fall off a cliff, and instead of trying to save it everyone just wants to film it to put on their Instagram feed. It is pathetic and I am ashamed to call myself a part of humanity. We all need to do a lot of soul searching and figure out what kind of world we want to live in; and then we need to figure out what we are going to do to get there.

I am not willing to accept that what will be will be. We are all better than this and none of us deserve any fucking award. If you can’t see the writing on the wall then you must be blind. This year was one tiny  step forward and three gigantic steps back for all of us.

So excuse me if I did not take the time and energy to entertain you with my witty banter and absolutely fabulous awards shit-show this year. I just didn’t see the point of it all when it is not any one person or group of people who are good, bad, or ugly… It is all of us. You, me, and the whole fucking world. We are all fucked up people with a lot of work to do. There is no getting around that.

My reality is that this year EVERYONE GETS A TROPHY. Congratulations. You earned it, you miserable fuck. Maybe next year will be different, but as for this year I do not have a lot to celebrate and I am disappointed with everyone. Take it for what it is, and shove it up your ass if you think I owe you something more. I don’t.

You are the fucking problem; and until you figure that out we are all fucking doomed. Selah.