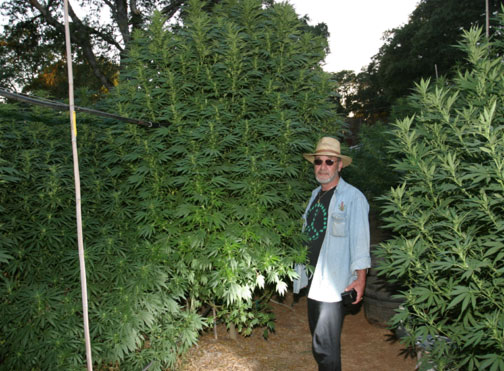 Old Man Gets a Decade in Prison for Growing Some Plants

It was crazy windy. Debris was blowing around the streets of San Francisco at a fevered pace. The wind was howling through the skyscrapers on the skyline.  The Reverend Eddy Lepp was wearing flip-flops; a suit jacket, a small brim pinstripe fedora with a Rasta colored band, some blue jeans, and flip-flops. It was May 18th, 2009 and this was the day Eddy would face federal sentencing for his role in the cultivation of over 30,000 cannabis plants. He would receive a mandatory minimum sentence of ten years in federal prison from Federal District Judge Marilyn Hall Patel before a courtroom packed with supporters.

No matter what your views are on cannabis, I think we can all agree that a decade is an awful long time for growing some plants. For Eddy, it may be a death sentence. This 57-year-old man has seen a lot and his health is not what it used to be. A lot of thanks for a man who served his country proud in his military days and whose crime hurt nobody. It is a sad day for society when rapists and murderers receive less time than a gardener. But maybe a gardener is a bit too plain for Reverend Lepp, as he is much more than simply that. He is also a dedicated political activist and a Rastafarian Minister. He is a caring soul and a generally happy guy who is always smiling. Even on this cold and windy day where he saw a decade of his life evaporate before his eyes he manages a smile.

Eddy has fought his fair share of battles for the medical cannabis movement and to him this was just another step in the process to freeing this plant from tyranny. Eddy began cultivating full-time in 1996 when California passed Prop. 215. He was the first person to test the legal system on this new law, as he was arrested, tried, and acquitted for growing medicinal cannabis. He was driven to growing cannabis to serve the medical needs of his loving wife, Linda, who was dealing with a second bout with cancer. Eddy saw how cannabis had given his father a decent quality of life in his final days fighting cancer and he decided that it was his duty to his wife to grow this healing and beneficial plant. Linda Senti lost her fight with cancer in the midst of Eddy’s battle with the federal government. She was not there to see her husband convicted in a short two-day trial that was anything but fair.

In trial Eddy was not allowed to bring forth a religious or medical defense to explain his purpose for growing cannabis. He was railroaded into fighting with his hands tied behind his back, but he was unwilling to accept that he had done anything wrong and refused to accept a plea agreement from the prosecution. He still does not regret his decision. “The only thing I regret is that these conflicts in laws are the reason I am going to prison,” declared the Reverend. “If I had to do it all again, I would do it just the same. I have done nothing wrong.” And in a sense he is correct. The laws that lead him to commit these crimes are unclear and misleading. Without a clear framework many folks like Eddy have been made into criminals for growing medicinal plants. It is unacceptable.

Don’t get me wrong. Eddy Lepp is no Saint. He is from the school of hard knocks, tells crass jokes, chases most women, and curses like he just banged his thumb with a hammer. But he is also a caring, courageous, friendly, and smart man who does not deserve to spend his final days on this planet locked up for growing cannabis. “I think the reason they are so pissed at me is because they felt embarrassed. Because I grew so openly and highway 20 ran right down the middle of it, they felt I was slapping my dick in the face of the DEA. This was never my motivation,” says Lepp. “I never wanted all of this bullshit to happen.”

Eddy took a rough road in his battle with the federal government. Medical cannabis activists and political organizations turned their back on Lepp because of his religious use defense. They saw it as a far too risky political statement and it did not fit within the parameters of their work, even though his farm was named Eddy’s Medicinal Gardens. “These organizations don’t want me to succeed anymore than the government does,” said Lepp. “If I win they are all out of business. You gotta ask yourself, with all of the money donated, couldn’t more have been done to create real change after 40 years of fighting these laws? Hell. I have done more myself to change the laws than some of these well-funded organizations.” He admits that the leaders and staff of these organizations are all likable and that some are even his close friends, but he is frustrated with the lack of direct action he sees from them at times.

And maybe he has done more himself for the movement. Lepp says his legacy lies in the proliferation of cannabis farming and the way that people approach gardening. “When I began growing no one dared grow over 100 plants. Now there are sprawling cannabis farms all over northern California,” says Eddy. “I believe my vision to grow affordable medication with no government involvement did a lot to show others that they too can expand their horizons.” There is some truth in that too. Eddy set the bar so high that many others felt comfortable in growing larger gardens and serving more patients.

Eddy’s work with the Rastafarian religion is a way of life to him. He believes he was born a Rasta. In the late 90’s a bright young man enlightened him in the ways of the religion and he understood he had been living this way of life since he could remember. “My religion is sacred to me,” said Lepp of his beliefs. “I am a very public guy, but my relationship with the creator is a private matter.” His religion helps him to lead by example. He believes in being happy and avoiding anger and hatred at all costs. Which is probably where that constant smile comes from.

Since being sentenced Eddy says his life has not changed much. He is living every day like he is not going to prison because he believes that he is not. “I still don’t believe I am going and I will not give them the satisfaction of ruining the days leading up to my fate,” he explains. “If I go, I go. I will accept and face that when the time comes.”

That time is July 6th when he is scheduled to turn himself over to authorities at Lompoc Prison located 175 miles northwest of Los Angeles. Barring a miracle he will begin serving his time as he awaits appeal. It is insane that he may walk in a prison on that day and not see his home in Lake County for nearly a decade. He hopes that it will take much less time to change the laws that will be imprisoning him. He could win his appeal, he could receive clemency from the POTUS, or he could hope that Timothy Leary’s friends are still around. All of the above are relative long shots, but if Eddy is anything he is optimistic.

No matter what you think about Eddy and his infamous gardens, you must admit he has balls the size of Jeep tires. His effort to legitimize the way cannabis is produced is legendary. His collective gardening experiment may have landed him in trouble, but it helped to open the doors for the current proliferation of people who grow cannabis for patient (and religious) uses. He may be batshit crazy, but he is also very wise. He understands that his case has the ability to create awareness and make real progress for the cannabis movement. More information regarding his whereabouts in prison and his ongoing appeals can be found at www.freeeddylepp.com. The message he hopes to convey with his journey is, “Respect All. Hurt None. Love One Another.” That is not too much to ask.

For everyone’s sake we should hope that his situation changes for the better. If our government is allowed to continue to lock up old men for a decade for growing plants on their own property then we may all be doomed. Can we live in a society where injustices like these are a reality? It is easy to look the other way and be glad that it is not you. But what if it were? What if it were your loved one losing ten years of their lives for growing medicine? Please do your part to write letters, call public officials, and protest viciously to demand the release of Eddy and the many other political prisoners being held by our own government. We must demand that justice and morality be restored to our country and that these horrible wrongs be righted immediately. It is too important to let go. Rise up and be heard. No more mandatory minimums for growing safe and effective medicine. No more drug war. No more senseless acts of tyranny. FREE EDDY LEPP!