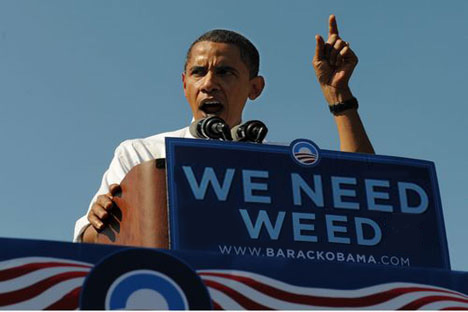 I was excited to see that 175 of our Nation’s most influential leaders in the civil rights, entertainment, music, faith-based, sports, fashion, media, and political communities  have come together to challenge President Obama to END THE DRUG WAR AND MASS INCARCERATION.

Orchestrated by the great and progressive Russell Simmons, these leaders have written the President a letter demanding that he put an end to these policies that have devastated our communities and have decreased public safety and quality of life over the past 40 years. The drug war is a failure. We lost. The drugs are winning by a long shot. We have locked up just about everyone we can lock up, and still our streets are filled with drugs and the black market drug trade.

Our law enforcement continue to fight this meaningless crusade against our own people and they are getting their ass kicked. We have charged them with being drug nannies and inspecting everyone’s person and property for these evil drugs. Meanwhile, we waste innumerable man hours that could be spent on fighting and preventing real violent crimes. A recent study showed that NYPD alone spent ove a MILLION man hours on weed in the last decade, and have ZERO to show for it. So besides getting their budgets inflated to fight imaginary and self-imposed crimes that are really more health issues, law enforcement has lost a lot of their position as the “good guys” in our society. In many minority communities the cops are seen as the enemy because of their overzealous drug enforcement, and in turn, when real crimes do happen like a murder, they have a difficult time finding any witnesses who will even talk to them. Their role as drug warriors impedes their ability to investigate real crimes. So it is time to let these guys get back to work, and end this disaster, and to let our brothers and sisters out of jail already.

It is inspiring to see this well-organized effort making the case. Below is the letter that was sent to President Obama and the 175 people who have joined the fight as activists in the fight to end the drug war and mass incarceration policies:

Your hard work and leadership on issues affecting the unrepresented classes of people in our nation have served as an inspiration to many of us who hope for brighter futures for all Americans. In that spirit, we believe the time is right to further the work you have done around revising our national policies on the criminal justice system and continue moving from a suppression-based model to one that focuses on intervention and rehabilitation. We are proud of your accomplishments around these issues, specifically your leadership on gun control, your investments in “problem solving courts,” your creation of the Federal Interagency Reentry Council, your launching the National Forum on Youth Violence Prevention and your prosecution of a record number of hate crimes in 2011 and 2012. We certainly hope that this type of leadership is appreciated by all members of Congress, regardless of political affiliation, and you are joined by members of all parties in your pursuit of a more perfected union.

Mr. President, it is evident that you have demonstrated a commitment to pursue alternatives to the enforcement-only “War on Drugs” approach and address the increased incarceration rates for non-violent crimes. Your administration has moved in the right direction by committing increased funds to drug prevention and treatment programs and supporting state and local re-entry grants. We encourage you to continue your efforts to revamp the policies of the last 30 years that have seen the prison population skyrocket.

The greatest victims of the prison industrial complex are our nation’s children. Hundreds of thousands of children have lost a parent to long prison sentences for non-violent drug offenses, leaving these children to fend for themselves. Many of these children end up in the criminal justice system, which comes as no surprise as studies have shown the link between incarceration and broken families, juvenile delinquency, violence and poverty.

Mr. President, we are a coalition of concerned advocates that is ready to support you in more innovative criminal justice reform and implementing more alternatives to incarceration. As you set in motion research and policy to combat this societal crisis, this coalition is poised to help you make the transition successful. In 2010, the passage of the Fair Sentencing Act was a tremendous step in the right direction, and we appreciate how hard you worked on getting that done. Some of the initial policies we recommend is, under the Fair Sentencing Act, extend to all inmates who were subject to 100-to-1 crack-to-powder disparity a chance to have their sentences reduced to those that are more consistent with the magnitude of the offense. We ask your support for the principles of the Justice Safety Valve Act of 2013, which allows judges to set aside mandatory minimum sentences when they deem appropriate.

We ask that you form a panel to review requests for clemency that come to the Office of the Pardon Attorney. Well-publicized errors and omissions by this office have caused untold misery to thousands of people. Additionally, we want to applaud your staunch commitment to re-entry programs that are necessary to ensure that those who leave the system are able to become productive members of society as well as reliable husbands, fathers, mothers and wives. We certainly would like to help you achieve an increase in the number of these transition programs. Finally, we strongly urge you to support the Youth Prison Reduction through Opportunities, Mentoring, Intervention, Support, and Education (Youth PROMISE) Act, a bill that brings much needed focus on violence and gang intervention and prevention work.

During your presidency you have made important steps and you now have the opportunity to leave a legacy by transforming our criminal justice system to an intervention and rehabilitation based model. Many of those impacted by the prison industrial complex are among your most loyal constituents. Your struggles as the child of a single mother allow you to identify with millions of children who long to be with their parents. We request the opportunity to meet with you to discuss these ideas further and empower our coalition to help you achieve your goals of reducing crime, lowering drug use, preventing juvenile incarceration and lowering recidivism rates. We stand with you, ready to do what is just for America.

One thought on “Dear President Obama…End The Drug War…Love, Everyone”