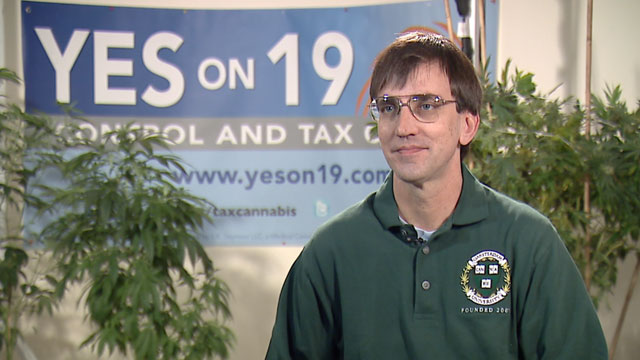 I hear a lot of praise and patting on the back happening for the victories in Colorado and Washington in 2012; and rightfully so, as they have changed the conversation where weed is concerned. These efforts have forced our society to take a hard look at our policies for marijuana and drug enforcement more closely, and not a moment too soon.

But what I also hear is a lot of revisionist history that fails to give credit where credit is due.

To be honest, I am pretty deep into cannabis awareness, and even I was unaware of the level of involvement the Marijuana Policy Project had in the Amendment 64 campaign in Colorado while it was happening. The campaign did a good job of distancing themselves from MPP and their Executive Director, Rob Kampia, whose sexual escapades has given the organization a less than stellar reputation. This article entitled “The Breast Massage Will Happen” from the Washington City Paper goes into explicit detail about the abuse of power and creepy culture of the organization, and their “hyper-sexualized” leader. 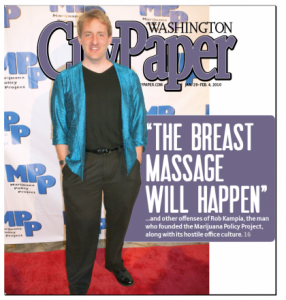 Yet, after the campaign, there was Rob to collect his spoils, and claim his spot as the mastermind who has brought the world cannabis legalization. All of the sudden, now Rob Kampia is using this victory as a vehicle to reestablish himself as a major player in cannabis reform boasting recently in an SF Gate blog about waiting until 2016 for the next initiative push, ““It really only takes 23 rich guys who can write $1 million checks, and I know 23 rich guys who can write million dollar checks.”

Now why these rich assholes would give Rob a million bucks is beyond me, but if Rob is anything, he is a prolific fundraiser. He unfortunately is not a leader, or even a very well respected member of the community. But his incredible ego will never tell him that. They guy brings down everybody’s average, really.

Yet for some reason, there are folks who want to credit this asshole with the courage to put Amendment 64 on the ballot. So let’s be clear….Rob, MPP, or any other of these reform organizations NEVER would have had the courage to go all in on a statewide ballot initiative like they did in CO and WA had Richard Lee not had the courage and vision to put proposition 19 on the ballot in 2010. The fact that Richard put the initiative on the ballot and was ABANDONED by almost all of the major policy groups and STILL GOT 46% OF THE VOTE on a very slim campaign warchest proved beyond any reasonable doubt that cannabis legalization was much closer than any of us thought. 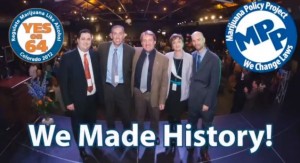 Marijuana Policy Project and NORML did nothing to financially back the effort. Americans for Safe Access would not even have the courage to publicly state that they supported the effort, calling it a “separate issue” (eyes roll).

Imagine if MPP and major donors had donated the millions of dollars, like they did in Colorado, to run public education campaigns, and to put more boots on the ground to educate our own community. Just think if the deep pocket donors, like Peter Lewis, who threw millions at the I-502 campaign in Washington would have even given a portion of that to the Campaign in California. Is it possible Prop 19 could have passed with better funding and a more galvanized effort? Quite possibly.

But one thing is for certain….after the Prop. 19 campaign was over the dialogue of our nation, and our collective conscious, had changed dramatically. The campaign opened up everyone’s eyes to the reality that cannabis legalization is certainly possible. This inspiration and motivation were the foundation for the Washington and Colorado efforts. Yet you will not hear the victory lappers give that credit very often. Rarely do they credit the Prop. 19 campaign with dramatically shifting the conversation on cannabis away from the “we are all very sick” mantra that had been the focal point for over a decade, to a “we are grown-ass adults who should be able to use weed” conversation.

The Prop. 19 campaign paved the way for the victories in CO and WA, and it is terrible that we now see folks willing to claim credit for this change in our society, with hardly even mentioning Richard and his bold effort in California  It is unfortunate that we now see people making claims about how they are calling the shots and will decide who legalizes cannabis where next.

But I believe it is worth noting that if it were left up to these folks, and had Richard not put forth a magnificent campaign on a shoestring budget with none of their support, we would likely be talking about 2024 for legalization; and even then these assholes would probably be skeptical of the polling data. Richard put the issue on the front burner, and for that, we should all be incredibly grateful. It would have been even nicer if some of these big box reformers would have came out and actually tossed a couple of bucks in the hat in 2010 to help; but hey…at least they can enjoy the results of the effort, which was a renewed national dialogue on ending cannabis prohibition.

Unfortunately, these groups were supposed to be the ones putting forth that dialogue….not a dispensary operator from Oakland.

Was Richard’s effort in California the first effort for legalization? Certainly not. Was it the one that changed the conversation and put cannabis legalization on the map? Yup.

But do not expect the ego-driven maniacs that hold the cannabis reform purse strings to tell you that. They would much rather keep you believing that their way is the only way, and that we must wait another four years for cannabis freedom. “Just give us your funding and we will keep it safe until we are absolutely 100% positive we can win this thing.” It is very sad.

Will another angel investor step forward and put an initiative forward in California for 2014; or will we allow these groups to kill the momentum from recent victories, and allow people to go to jail, lose their kids, lose their jobs, and lost their standing in the community for another 4-6 years? Is it possible to raise funds outside of these limited resources? Sure. Wouldn’t it be nice if there were a galvanized effort to spearhead that massive fundraising effort? Like an organization dedicated to policy or reform or access, or something like that?

Does anyone realize that even though Amendment 64 and 1-502 passed in 2012 that there will likely be no cannabis industry in place in either state until 2014? So it is safe to imagine that if we wait until 2016 to legalize cannabis in California that we are talking 2018 before we ever see an adult use weed store on the Cali map? Yeah….fuck all that noise. The world will be a different place. Marco Rubio will probably be President by then.

For some perspective….if we go back in time 4 years from today to February 10, 2009, there were ZERO dispensaries in Colorado. Today there are hundreds of dispensaries, regulated grows, and did I mention weed was legal there? To think that this will be the same world four years from now, and to leave our fate to chance, is beyond bizarre to me.

The reality is that the world is changing fast, and if we want to be in charge of our own destiny, we cannot afford to rest on our laurels and wait for a sure thing in 2016. If we do, we should not be surprised when we are forced to take what we are given when policy does indeed change. And it will change. You can count on it.

I thank Richard Lee for his willingness to put himself, his resources, and the fate of our movement on the line in 2010 for cannabis freedom. It would be nice if the rest of the yahoos might mention that in their victory laps and groovy back patting videos from here out, and maybe consider growing a sack of nuts while they are at it. Thanks.