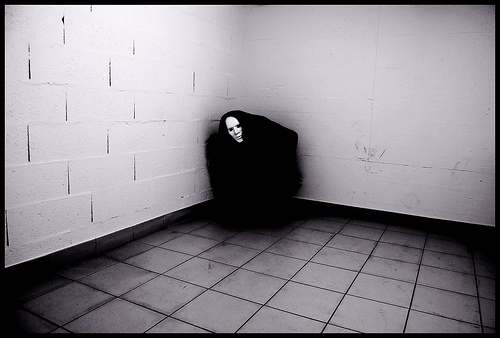 What is wrong with the cannabis movement?

We are literally watching cannabis prohibition die before our very eyes; but if you looked around you one would think that Richard Nixon just got re-elected. It is one of the strangest sights I have ever seen.

Last week the US Department of Justice and US Attorney General Eric Holder dropped THE most groundbreaking policy changes in the history of cannabis. They decided to stand down on challenging laws for adult use legalization measures in Colorado and Washington State, and handed down directives that spell out clearly the allowance for state run cannabis programs. I spell out these changes in a piece called “The world has changed. Act like it already” here.

This should be a time for celebration. It is a HUGE victory for cannabis freedom.

But the rhetoric we are hearing coming from prominent activists, reform organizations, and so-called leaders is anything but. For some reason, many in our community have decided to take the “Fuck this. We are screwed. They are setting us up,” position. It is the wildest thing I have ever seen.

First we have David Downs writing these terribly evidenced pieces in the East Bay Express and Smell the Truth blogs where he is trying to claim that US Attorney for the Northern District, Melinda Haag will “continue her crackdown despite the feds.”

What a load of shit. Downs usually does better work, but one can tell that there is a desperation for any story that can shed light on what this will really mean for our community. BUT LOOK AND READ WHAT WAS ACTUALLY STATED:

Lili Arauzhaase, speaking for the US Attorneys Office in the Northern District told us:

“At this time the US Attorney is not releasing any public statements. The office is evaluating the new guidelines and for the most part it appears that the cases that have been brought in this district are already in compliance with the guidelines. Therefore, we do not expect a significant change.”

So big D-Downs calls Haag’s office the day the memo comes out and gets this Lili person on the phone. Awesome. When he questions her about Haag’s response to the memo, she says “we are not releasing any public statements.” What that means is that there IS NO OFFICIAL STATEMENT FROM HAAG. That is pretty clear from the beginning there, right?

But the person goes on to defend her boss’ work, stating “…for the most part it appears that the cases that have been brought in this district are already in compliance with the guidelines. Therefore, we do not expect a significant change.”

Downs takes this and runs with it. “THE SKY IS FALLING! HAAG SAID SHE DID NOTHING WRONG AND THERE WILL BE NO CHANGES! THE SKY IS FALLING.” What a delightful story to splash across the blogosphere to get people to read your stuff.

The problem? It is not exactly what was said, nor is it anywhere near an official statement. It is a low level staffer trying to save face from a reporter looking for an angle.

And even what was said shows no backbone of confidence….last time I checked “for the most part” meant we have been wrong on some accounts and “no significant changes” meant that some changes were apparent. And remember, this is backpedaling minutes after the memo dropped in a non-official statement from the person answering the phones. Even this knee-jerk “we did nothing wrong unofficial statement” shows clues of change. In fact, it states there will be change, just not “significant,” whatever that means.

But I expect this type of hyperbole from David Downs. I love the guy, but at the end of the day he is a reporter and his job is to sell interest in his story. The more sensationalist one can make a piece the more hits it gets, and interest it draws, and more ads are sold. Pretty easy equation there.

He also fails to mention that each district will have to develop specific guidelines for their district and submit them to the USDOJ in Washington for review. Holder mentioned it in his historic statement on sentencing reform just two weeks before the cannabis memo stating:

This means that federal prosecutors cannot – and should not – bring every case or charge every defendant who stands accused of violating federal law.  Some issues are best handled at the state or local level.  And that’s why I have today directed the United States Attorney community to develop specific, locally-tailored guidelines – consistent with our national priorities – for determining when federal charges should be filed, and when they should not.

Maybe we should let Melinda Haag do her homework on this and develop specific guidelines before we rush to judgement based on some loose phone conversation with a peon, no? 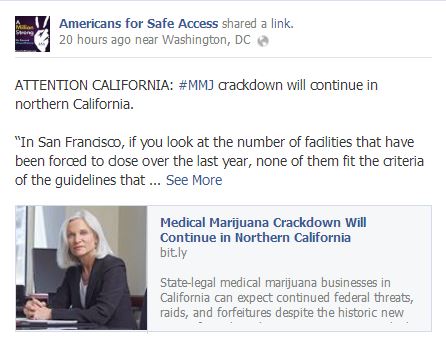 But the disappointing part is that Americans for Safe Access, the nation’s largest medical cannabis advocacy organization decided to jump in on THE SKY IS FALLING party and gin up some good old fashioned paranoia for their followers. Here is what ASA spokesperson Kris Hermes added to Downs piece to really send the community into a tailspin:

“Of the hundreds of dispensaries that the Justice Dept. has shut down by way of threats to their landlords, in almost all of those cases, there was no violation of state law,” he said.

The cities of Berkeley and Oakland are suing to stop Ms. Haag from closing their permitted dispensaries. More than 50 California jurisdictions have regulated medical pot distribution.

“In San Francisco, if you look at the number of facilities that have been forced to close over the last year, none of them fit the criteria of the guidelines that have just been issued by the Justice Department. None of them,” Hermes said.

“I think we’re being sold a bill of goods and Haag is turning around and doing whatever she wants. The free rein the Justice Dept. has given its U.S. Attorneys has to be pulled in and Haag has to be forced to answer for her actions,” Hermes said.

So Kris Hermes, based on this loosely worded statement from a phone answering schlep given on the day of a new policy change, uses this as the basis to come out publicly and state “WE ARE BEING SOLD A BILL OF GOODS?” Really? This is how our leading advocacy organizations choose to respond to non-official statements from US Attorney staffers?

Seems a bit overblown and unnecessary from where I am sitting. Why rush to judgement? What does one gain by casting doubt on the policy shift on cannabis? Whatever could an organization gain by working to pump the breaks on the most groundbreaking reform ever to hit the cannabis community?

“We are being sold a bill of goods. You should donate more money for us to continue fighting this travesty” is what I hear.

But ASA is not alone. I have heard a number of prominent activists use terms like “cautious optimism.” Let me get right at that….

CAUTIOUS OPTIMISM IS STILL OPTIMISM. WHAT IS HAPPENING IN MANY REFORM CIRCLES IS NOT OPTIMISM AT ALL; BUT AN OVERT ATTEMPT TO UNDERMINE PROGRESS TO SAVE POSITION AND MAINTAIN SOME SEMBLANCE OF THE STATUS QUO TO PROTECT THEIR VERY EXISTENCE.

People see the writing on the wall, and understand it is just a matter of time before nobody needs to donate money to your weed reform group because the world has indeed changed. That can be a hard pill for many to swallow. Something they have dedicated their lives to is disappearing before their very eyes, and they are struggling to come to terms with that.

I fell for their loss…..not.

This is the game we all signed up for; at least I thought we did. Work our asses off to make weed legal and celebrate when we succeed. WE ARE SUCCEEDING.

Yet, in my life I have never been so depressed from interacting with the cannabis community. Instead of being excited that our justice Department is putting clear cannabis reform on the table and calling for a huge overhaul of the sentencing and prison programs, our community has decided to sound the alarms and call the whole thing a giant trap.

“We are being set up” and “Don’t fall for it” are pretty common catch phrases on Facebook and Twitter these days. It is almost like we have no idea what to do with a victory and choose to parlay any victory into a forgone defeat to appease our need for chaos and confusion. I am sure any enforcement action, even if it is some jackass sending a million pounds to Kansas or some shit, will be clear evidence that proves the paranoid losers point of view.

It is a shame to watch this sense of defeat and fear take over the dialogue in this movement at a time we should all be proud of our work and celebrating a historic victory.

I am not naive enough to think that everything will get better overnight; but things ARE getting better…and quickly too.

No…everyone was not let out of prison in the first week; and all lawsuits happening were not automatically dismissed. The world does not work like that unfortunately. But I am more hopeful now than I ever have been before that the beginning of the end is upon us.

I believe we will begin to see some released from prison near the holidays and I think we will see a significant drop in enforcement across the board. I think California will finally take up regulations for the industry this fall. I think state legislatures and initiative backers are accelerating their timelines and we will see more states come online for adult use cannabis and medical cannabis way before any 2016 BS. I believe we will see some cases dropped and others not prosecuted as vigorously. I think there will be REAL AND MEANINGFUL CHANGE.

“But we have heard it all before. It is just more lies,” says the paranoid weenie loser activist wannabe reformer.

No we haven’t. We have never heard this.

I am not sure what some folks stand to gain by automatically rejecting the olive leaf and publicly admonishing the most historic shift in cannabis policy in history; but I hope it works out for them. I hope that wandering around trying to convince people the sky is falling is good for their bottom line or their soul.

But to me you just look like a bunch of paranoid assholes trying to retard progress by stoking the fire of fear with your dumbass paranoia. Bitch don’t kill my vibe……please. Thanks.