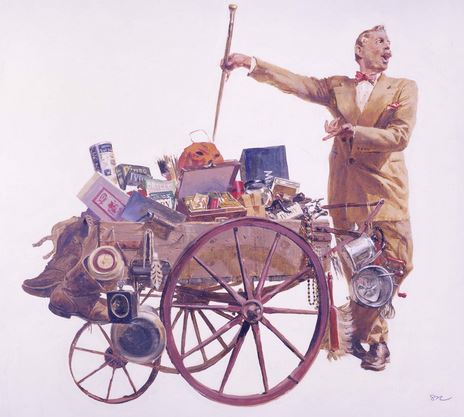 The cannabis industry is changing. There is no getting around that.

As the industry evolves into a more legitimized market, we see the hucksters and charlatans coming out of the woodwork to separate the fools from their hard-earned cash. It is easy to see why they do it….because they can.

Unsuspecting good people who want to understand how they can be a part of the industry are willing to open their wallets up to those who they believe have the knowledge and experience they are looking for.

Unfortunately, there are a series of half-baked nitwits who have come together to pretend they are experts, and who talk a good game with absolutely zero experience or accomplishments to back them up. They will gladly tell you what you want to hear to get you to cut a check. They will have a fancy website that talks circles around the industry with no reference to even one actual client who they have helped, or dispensaries they have opened.

I had never heard of this band of idiots before last week. I had seen their name on some over-hyped and non-believable press releases floating around, and I assumed they were another group of spinsters who were trying to make their nut in the cannabis industry giving half-cocked and ill-conceived advice to unsuspecting wannabe cannabis moguls. But I did not pay them much attention because, honestly, there are a dozen of these ass-clown groups trying to get attention with bogus press releases and “we are so great” hyperbole these days. It is hard to keep up.

But then last week I get a call from a kid named “Brian.” He wants to have his “boss,” Adam Bierman, join us at the Massachusetts Cannabis Knowledge Forum. He is fishing for more publicity for his scam and believed that his guy was worthy of educating people on the cannabis industry at the MCKF.

I politely tell him that we have already booked speakers, and that the advertising was already done. I also let him know that we were doing an activist panel at the end of the events if he thought his boss was an activist. His response?

“Yeah. Adam was on a panel in Vegas. He is an expert. We have helped open licensed dispensaries all over the United States.”

It was a more than fair question. I expected them to pop off with some random groups in Arizona, which I would hope to contact to verify; but instead his answer was something far more insane.

I very nicely (holding back my laughter) told him, “There are no licensed dispensaries in Los Angeles at this time. Nor has there ever been a competitive application process there.”

“Yes…Yes there are,” he quivered. There are 130 pre-ICO collectives….”

I reminded him that the simple registration in 2007 was no application process and was actually deemed illegal in a court of law. It was forms that were filled out by anyone and everyone and resulted in chaos in LA for the past several years until this very day. There were STILL no licensed shops. What the election in May did was ban all dispensaries but gave an exception to those who registered before the illegal moratorium in 2007.

But these guys are the experts, right? Why should I be telling them this?

I inform this kid Brian that he is misleading people in his explanation of these vague accomplishments with no names to back up those claims. Here is where it got weird.

The kid says…”Oh yeah. well suck my dick. You will never be successful anyways.”

I break out in uncontrollable laughter. I have NEVER been on a business call and had another supposed grown man tell me to suck his dick.” It has just never happened…and I have had some VERY heated business conversations in this industry.

But the dude just broke. He had no answers for his lies, had been called on his shit, and just broke. The best he could come up with was “suck my dick.”

After I got done laughing I attempted to contact his boss, Adam Bierman, to see why the hell he would hire such amateurs to do his bidding. I sent him an email, and tried to call the number listed on their fancy website of platitudes. when I call the number an the Brian kid answers again.

“I would like to speak to your boss, Adam,” I reply.

“He read your email. What do you want me to do?”

A little peeved at this point I respond, “A fucking apology would be nice.”

The kid does not miss a beat and says “I fucking apologize” and hangs up on me.

I did not know if I was mad, or so amused by the situation that I could not even get mad. I felt bad for them. It was like they had never really been questioned about their accomplishments before. I cannot imagine some unsuspecting idiot getting snow-jobbed by these hucksters without at least asking, “Have you helped anyone actually open a licensed dispensary before?”

It seems like a natural first question, but either a.) they really have no clients and are using the one illegal dispensary this kid opened a few years back as their “model”; or b.) they had the world’s stupidest clients who just threw money at wannabe consulting groups without doing any homework on them.

But this is indicative of what we see happening all over the industry. People are coming out of nowhere to sucker good folks out of their money for services they have no clue of how to provide. The MedMen are just one of many charlatan groups who have decided to jump on the get rich quick at someone else’s expense bandwagon. The reason this dude was calling me to get a speaker spot on the event is because he NEEDS exposure to make his scam happen. He NEEDS to be relevant. He is not on his own. Check his bio:

Adam has become an industry leader and expert, featured on Fox, ABC, Playboy Radio, KTAR and The College Times. He has applied his knowledge of the medical marijuana industry to build The MedMen, which is the first consulting firm of its kind, providing turnkey opportunities for dispensary operators in Southern California. Having proven a model, Adam expanded The MedMen into other areas of the United States, providing state and city-specific services to dispensary operators. He is concurrently President of The MedMen’s parent company, Modman Enterprises, a branding and marketing firm with a focus on health and wellness related industries.

Became an industry leader and expert how? And for that matter, when? I have been here for a long long time doing this and had never even heard of the dude outside of his own overblown press releases. He has applied his knowledge of what? Where is this proven model? How come we cannot talk about it? Turn key opportunities for which dispensary operators in Southern California?

The dude’s bio, which is where one showcases their talents and accomplishments, only further opens the door to more questions. The only accomplishments and credentials he can list are that he opened MedMen consulting. Beyond that, it is a pretty slim resume it would seem.

But do not just take my word for it. A short Google search reveals a harsh reality. Here is what the Ripoff Report wrote about Adam Bierman in one of his previous hair-brained schemes called “Brand X”:

As I hope you see from the facts below, The Brand X Group is as ethical as Enron. Truly, really Adam Bierman is a genius with words, like Hiter before him, he can rile you up to  believe anything he says. Past the fast talking, you need to ponder and think about what people have been saying about this man. A boy with no character who runs an ethically bankrupt business which is reflected by his way to get/save as much money as he can. This is probably the third report on Adam (who was previously COO at a company called XTS). With his trusty sidekick Andrew Modlin, now apparent COO of Brand X, they will market anything you want, but you’ll be wasting your time. None of them are ever effective, and to be associated with this marketing firm is a liability for any company.

A real consultant is not out fishing for business. They generally have more work than they can account for and are turning down opportunities. Their business does not come from fancy press releases or media stunts…it comes from word of mouth from people who recommend their services based on past success and experience. They have a resume and references to give you that verifies they know what they are talking about. They have succeeded already, and have no need to lie about their accomplishments because they are all there to see. They are happy to discuss their accomplishments because they are real and verifiable. They also do not tell you to suck their dick if they cannot answer a question.

But if you fail to dig deep enough, or are swayed by the pile of misinformation and misleading bullshit of a real-life huckster, then do not be surprised when you blow some cash learning a valuable lesson. This industry is full of people who will tell you what you want to hear to make a buck off of your hopes and dreams. It is up to you to verify people actually know their shit.

So before you head down the yellow brick road to failure and disappointment, do your homework. Ask for references. Talk to people who your consultant has helped in the past and make sure they are legit. If they are, their clients should have no problem telling you that they did a great job for them. If you are looking for a good consultant, do not do a Google search or contact the guy you saw quoted in some press story. Find a person who has had success with a consultant, and ask them who they used.

Or don’t, and be the fool who is soon parted with his money. The choice is yours really.

But fair warning…..If it sounds too good to be true, and is not backed up by verifiable fact, chances are you are getting took.