Since the Prop. 19 debate was in high gear, there has been some conspiracy theorists who would have us believe that we must keep taking people to jail for weed to avoid the take over of big business in the industry. To me, just writing that makes me feel a little crazy.

If I have to explain to another seasoned cannabis activist why “decriminalization” is not enough because it still penalizes people for enjoying and producing weed, and still allows for law enforcement to violate the rights of people who smell like weed by searching their homes, vehicles, and persons, I am going to lose it. When did our own movement become the prohibitionists?

The reality is that we cannot limit freedom. Big business will have just as much freedom to come into this industry and compete for revenues and income as anyone else. That is the beauty of freedom. As soon as we begin to try and dictate who can, and who cannot, be involved in the industry we have become the prohibitionists we have spent so many years fighting. We cannot allow our fear and distrust to overcome our desire for freedom and justice….big business or not.

Shively described grand visions for his pot brand – hundreds of millions of dollars in investments, tens of millions of customers, more than 1,000 jobs just at Diego Pellicer’s Seattle headquarters.

“Yes, we are Big Marijuana,” he announced.

Immediately the cannabis fringe began to circle the wagons with their “I told you so. Monsanto is coming to cannabis” hyperbole. The sky is always falling with some folks in this movement, so it was no big surprise to see the same old same old tired tin-foil hatters bring their fear mongering forth to try and scare the bejeezus out of people with their tales of terminator cannabis seeds, and the fear of losing everything they have worked so hard for.

Ugh. I hate this industry/movement/clusterfuck for a lot of reasons, but none more than the irrational and idiotic thinking, or lack there of, that manifests into rumors and lies being put forth as truth and reality. When can we move past the dumb shit and begin to understand that a “legal” cannabis market will include businesses of all sizes participating in supplying the global demand for cannabis? When can we learn that freedom is bigger than any individual or group of us?

The really funny part is the fact that a lot of people in this industry and movement cannot even begin to grasp the scope of what an international global cannabis market can, and will, look like. So let me try to paint you a picture.

Hypothetically, let’s just say that cannabis were 100% absolutely legalized tomorrow (or maybe by summer). Do you understand what that means?

Currently, it is estimated that maybe 10-15% of people in America use cannabis even though it is a crime (this number is even lower internationally). In comparison, 67% of people in America drink booze. The reason more people do not use cannabis is not because alcohol is better. It is because people are afraid of being criminals and being harassed by cops for their cannabis use.

So take that restriction away. Say people no longer have to worry about being arrested, or losing their standing in the community, because they use weed. What happens to that percentage of people who use cannabis? It dramatically increases, right?

Maybe it does not reach the 67% of people, like booze has going (at least not right away); but what if it jumps up to even 40% of people. What if the global demand for cannabis increases by 3 or 4 times overnight?

I live in California, but I do travel all over. I know for a verifiable fact that even currently, there is not enough decent weed in America to feed even our own demand. This is why over 50% of the cannabis used by Americans is imported from Mexico. We do not have the growing and processing infrastructure to even meet the demand of our fellow countrymen….now think globally. Do you see how there might not be enough cannabis to go around if weed were legal tomorrow?

It is going to take some serious big business infrastructure to feed the global demand for weed, and if we want to really make cannabis a normalized and boring part of our society that is as non-controversial as coffee or wine, there WILL BE big businesses involved to meet that demand. It is just stupid to think otherwise.

But here is where people really fail to consider reality.

Look at the wine industry. There is undoubtedly some behemoths in the wine industry who mass produce low-grade swill for the market. The “two buck Chuck” is a mass produced bottle of wine that for all intents an purpose is a pretty good deal for people on a budget. Does this mean that people do not have the choice to buy a bottle from a small batch producer? Of course not. But it does mean that a person with less money can still get a decent bottle of wine because this “big business” has developed production methods that enable them to offer decent products at a reduced cost. That is cool from where I sit.

A lot of the outrage and fear comes from people who grow cannabis. There is always the talk and fear of “big business driving us out of the industry.” Fear not, small farmer. If you take a good close look at the wine, or coffee, or chocolate industries, the reality is that most mass producers do not grow all of their own ingredients. They contract small farmers like you to grow them a batch of grapes, or beans, or whatever, to use in their finished products.

Imagine small weed farmer, no longer having to hustle the streets and live in the shadows to sell your crop. Imagine that your crop was sold before you even planted it, and that you could openly and honestly develop your craft into a thriving small family owned farm, like we see in so many areas of agriculture these days. Imagine not having to worry about being robbed and killed for your crops, or worrying about “the man” coming and taking it all in the middle of trim season. Not a bad deal, right?

Sure….you will not get $1,500 a pound any more, but you can openly grow 10x as much weed and make up the difference in volume.

I know that there is a serious outlaw culture in the cannabis game who know nothing other than the wild world of the weed black market. As much fun as it is playing clandestine weed grower, the truth is that the world is changing and it is changing fast. You can either evolve and embrace the change and figure out where your outlaw ass fits into the equation; or you can try to deny what is happening and fight tooth and nail to preserve your black market unregulated off the grid status for a while longer until you have banked that million dollars that is never coming, or have ended up in prison for your efforts. That choice is yours to make.

But “Big Marijuana” is coming, and I for one could not be happier.

Why? Because Big Marijuana is a bold symbol of freedom to me. When there is a former Microsoft guy holding a press conference with the ex-President of Mexico to talk about how they are ready to drop $100 million bucks into the weed game, I do not see some brash take over of the industry…I see freedom. I see a willingness to put it on the table and take this thing to the next level, and I thank Shively and Fox for their courage to put it out there.

I might not buy their Diego Pellicer products, as my general inclination on any product, whether groceries or wine for my wife, is to buy from small batch producers. I try to hit small independent coffee shops, and my wife likes to buy as much of our food as she can from independent farmers at farmers markets. That is our choice, as it will be our choice in a globalized cannabis market also.

But that does not mean I do not see the value in the offerings of bis business and major corporations. Do you have a car? Chances are it was produced by a big business. Why? Because it is hard to make a car yourself…the same way it is hard to grow enough weed to feed the demand of an entire planet.

So before you go all nutso renegade to try and shut big business out of our industry, just think about the bigger picture and what freedom really means. Freedom means that businesses, large and small, will have the right to compete in the market. Freedom means choice, and consumers will decide if they want to accept, or reject, big business offerings for weed. We have the right to support or deny each of these companies individually as they come to be, and use our purchasing power to demand that they operate ethically and respect the cannabis culture. But we cannot reject freedom because we fear competition from big business. That is called prohibition.

Take off the tin-foil hat….it is gonna be alright. I promise. 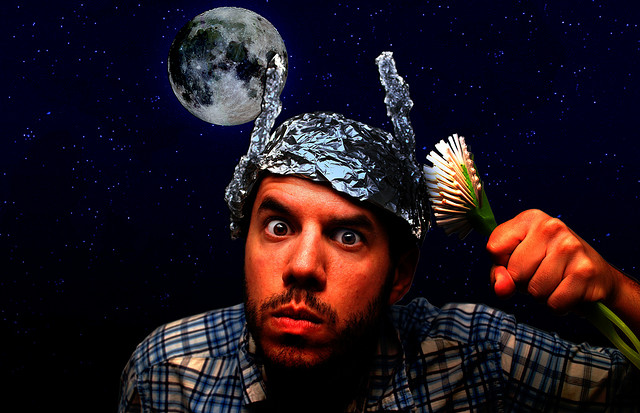