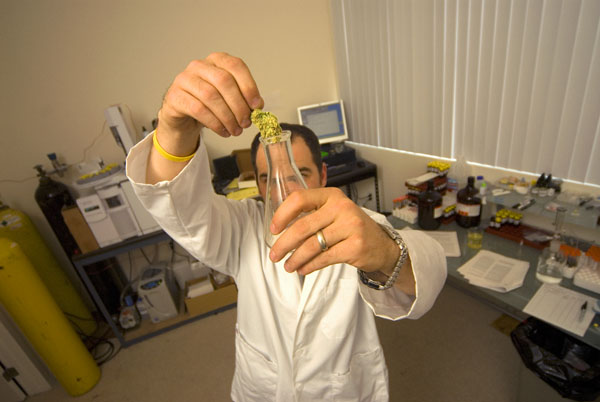 Lab testing for cannabis has been developing over the past few years, and has been somewhat successful in helping to better understand potency, cannabinoid levels, and certain safety aspects of the industry and products. Labs have sprung up all over the cannabis landscape to provide testing services to dispensaries, growers, and cannabis product makers. It has been a most interesting phenomena to watch, and even for all of the questions the testing industry raises, it has been successful in helping to legitimize the effort of providing cannabis in a more informed and regulated environment. This has helped to ease the mind of some local governments and has given some authenticity to an otherwise loosely regulated market for production and distribution.

But there are some major issues facing the testing aspect of the industry.

The big one is ethics. A laboratory that is testing products should have no vested stake in those results. The unfortunate situation we face is that since the labs were mostly funded by people in the industry, are run by people with direct ties to organization and providers in the industry, and test the products of both those they have affection for, as well as those their associates are competing with, there is a questionable authority there.

We are all human. There is no getting around that. People will like some people and not like others. That is a fact of life. So if two products come in for testing, and one you recognize as being a friend or associate’s and the other is a person they are competing with for income and success, it is easy to see where scruples may come into play.

Now this is all fine and dandy until this “power” is abused, and the possibly skewered results end up in people losing their place in the market, or not being able to do business. I know a dispensary in Oakland that has to test 110% of the product they plan to sell because the lab they work with kicks about 90% of the product back as “dirty.” Now I am no expert, but I do know a lot of pot growers and I would not say that 90% of them produce shitty weed.

But to further complicate the matter, the lab they use is directly funded by another local dispensary group, and is operated by folks who have clear and well-known associations with a number of vendors. They also have direct relationships with several product makers who do testing with them on the regular independent from the dispensary itself. One can see how it would be more beneficial to clear this product that is produced by an associate or client, while rejecting a product that competes directly with your associate or client. This is a no brainer. A third party verification resource that results in whether or not a person or product can operate in a certain market has got to be unaffiliated with other people competing in that market.

But let’s just step back from assuming that people may not be on the up and up in providing their results. Let’s just assume that everyone testing cannabis is an upstanding person who would never rig the game to help advance their own cause financially. Let’s just say that the dozen or so labs in operation are all operated by people with no vested interest in providing this certain person, or that certain group with favorable results to give them a competitive advantage.

Let’s just look at the standards, methods, and result factors.

So if I owned a dispensary and were looking for a lab to do my testing and I sent products out to three or four different labs, if one lab is consistently returning my products with higher potency levels and less contamination than the others, who am I going to do my business with? Say there is no personal relationship between me, my organization and any of the labs in play…..if this lab gives me results that are 2-3% higher than the others on the regular, wouldn’t it bode well for me to use them so that I could advertise medicines with a higher potency level? That is easy to figure out, right? If people like weed with more THC and this lab gives me results with consistently higher levels of THC, then they are where I am gonna do my testing? Duh…

So it is invariably more beneficial for a lab to provide those higher results to be more attractive to their client, no? And therein lies the problem.

There is no set standards for chain of custody, methodology, or calibration in cannabis labs. I recently had a friend take the exact same hash, from the exact same container, stored- handled- and sampled in the exact same manner to four different labs. Needless to say we got four VERY different results. So what gives?

This issue is coming to light in Colorado, where the Amendment 64 task force has recommended that all edibles be limited to 10 mg of THC per serving and 200 mg of THC per package. That is all fine and dandy, but who gets to do the testing? I mean, I assume that there will be oversight of this standard for potency, and who gets to make the call on whose products meet the requirement, and whose do not? Are they going to let an existing cannabis lab, likely with ties and relationships to many folks in the industry, do the testing? If this is a barrier to entry to the marketplace then shouldn’t this testing be done by a truly independent and arbitrary third party lab? Will there be a state run cannabis lab? Should there be?

But lab testing ethics, morals and legitimacy are not unique to cannabis. Just how the labs have developed from within the cannabis bubble are; but all labs where their results hinge on a person’s business success, or even freedom,  face certain challenges. Look at the woman who was caught screwing with results and stealing drugs from the criminal drug testing lab in San Francisco. When it was discovered that her behaviors had breached the authority and integrity of the lab the District Attorney was forced to throw out upwards of 1,400 criminal cases. Why? Because when a lab and its results are used as the basis for authority there has to be faith that those results are unbiased and real. I mean, if you are going to put a person in prison for the results, they have to be legitimate.

The same goes for lab results that enhance a product or organization’s success and income level, or that decide whether or not a vendor’s products can even go on the shelf. If these results are the defining factor as to whether a product is legit or not, then we have to be able to trust that the results are from people who do not have a vested interest in promoting them, or in making sure they never make it to market.

As long as many, and most, lab s have ties to certain dispensaries, growers, and vendors there will always be questions in the continuum. For now, the loose and unexamined results coming out of labs will have to do, but there is no way that this will last as the industry comes more into focus, and there is more scrutiny placed on these results. We are already seeing it somewhat in areas like Richmond that mandate testing. If that result is the defining factor as to whether or not a product can be sold in that City, then it better damn well be an accurate result that is not influenced by the lab’s associations.

But the clear reality is that weed is generally safe. While their are certainly some matters where contaminated cannabis can affect people, especially those with compromised immune systems, it is extremely rare that people fall ill or die from smoking bad weed. So before we do ourselves in with the “sky is falling and all weed is contaminated and must be rigidly inspected” shtick, step back and ask yourself how much of this is contrived to promote the need for lab testing, and how much is based in the actual threat of harm to the average weed smoker? Show me the bodies….