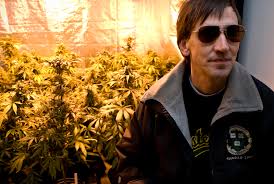 Legalize it. What could be simpler than that? Ask Richard Lee. Since he began his effort to pass an initiative that would legalize, tax, and regulate cannabis for adult use he has experienced resistance from all angles. The progressives think it is too conservative and the conservatives think it is too radical. It is a process that is continually evolving, as he tries to weigh and balance all of the different viewpoints that he has come across since the inception of the Tax and Regulate Cannabis 2010 ballot initiative hoping to legalize up to an ounce of cannabis for personal use and allow for the creation of a system for adults to legally obtain cannabis.

It is not as if Richard agrees with every aspect of the initiative, but he also wants it to pass. He is confident in the measure passing if there is an all out effort for it. He definitely thinks it is a better time than ever before in the history prohibition to push a measure like this forward. Rich believes that it is sort of like the primary season of an election and although many activists have expressed concern and have outright threatened not to support it, he thinks they will come around and be united for the general election aspect of it. He has sought the advice of the cannabis community, but he also has to weigh that with the input from highly skilled political consultants who know what it takes to pass an initiative.

There are some obstacles to overcome on many fronts regarding the wording and content of the initiative. Richard says he appreciates the enthusiasm of those who have expressed opinion on the matter and is pleased by the dialogue it has created within the community. “We are lucky to have so many diverse viewpoints in the reform community,” he says. Some matters he has had to confront from activists are the one-ounce limit proposed, whether or not to have a provision for releasing prisoners that have been convicted of marijuana crimes, the decision to allow counties to have the option of not participating, and the 21-and-over age limit it imposes.

His response to those who say possession of an ounce is too little and that it enables law enforcement the ability to still jail and arrest users is that it is a simple matter of politics. “An ounce is the current decriminalization amount that has been used for 30 years in California,” says Lee. “An ounce is equivalent to about two packs of cigarettes, which is reasonable for adult use needs. It is just a starting point. After it is more (federally) legal then it will not be an issue, like alcohol, there will be no limits because there are no issues of resale or diversion. It is not perfect, but it is a start.”

The issue of writing in a provision that releases prisoners is a more tricky matter, and somewhat of a political hot potato. Remember Willie Horton? It was a smear campaign against Michael Dukakis that painted him as weak on crime because a bill he signed as Governor released a prisoner that ended up committing more horrific crimes after being released. Dukakis lost the election handily after not rebounding from this crack in his armor. Richard Lee does not want to give ammunition to those who are sure to oppose him and he is not even sure if it is legal to include releasing prisoners. “According to the attorneys I am working with an initiative cannot retroactively go back and change people’s sentencing, but it can make it so if the law is changed prisoners can petition for their release,” says Lee. Many activists agree that adding a “release of prisoners” aspect to the initiative is an easy way for law enforcement and opposition groups to scare the bejeezus out of the public and will make it much more difficult to get passed.

When asked about the provision allowing counties to opt out of the measure, he says there are two reasons. One is you cannot force a county or city to break federal law. “You cannot pass a law that says you must break federal law,” he says. The other reason is political reality. “Look at the medical cannabis situation. Some cities allow for it and others do not. You cannot force a horse to drink,” say Rich. “Progressive areas like Oakland and San Francisco will thrive. Remember after alcohol prohibition not all states legalized it right away. Mississippi did not legalize it until 1966. It also gives jurisdictions choices on how they will implement it as well, whether it be coffee shops, retail establishments, pharmacies, or whatever.”

His reasoning for the 21-and-over is that it gives it a better chance to pass. It is another simple political reality. The initiative does leave the option open for the legislature to adjust that if they see fit, but he believes it is an easier sale to voters to let them compare it to alcohol in that sense.

Hemp cultivation being allowed is a major issue that could help bring some rural voters around. “It will make California the 8th state to allow for hemp cultivation. In some ways it does not need an explicit paragraph to allow for hemp. It would stand to reason that if you could grow high THC cannabis that it would be given that you could grow low THC cannabis plants,” he says. “But we did put a paragraph to ensure that it was covered though.”

He hopes that medical marijuana supporters will also get behind legalization to help clear up some of the confusion created by the medical laws and their implementation. “We need to get law enforcement to quit playing doctor and allow for sensible use by adults with no judging if they are sick enough to use cannabis,” Lee states. “They need to know that we will never give up. That we will continue to demand that people be allowed to use cannabis.” He understands that it is an uphill battle, but he also understands that doing nothing is not an option. Rich believes that people are sensible enough to pass a reasonable initiative that is balanced and provides compromise, without selling out all of our rights.

The initiative is a bold step in the right direction. It is actually one of many bold steps in the right direction, as two other cannabis legalization initiative efforts have also been filed with the Attorney General’s offices. The two other initiatives are much more loosely controlled and worded and have some ideal concepts in them both. The question is if we can afford to base an initiative on our community’s ideals and risk losing at the ballot box because we tried to do too much. This is the great compromise of it all. It does not matter what any of us think unless we can convince over 50% of California to follow our suit. It will be interesting to see how the initiatives all play out in the signature gathering and support stages of their development.

It is inevitable that this effort will not please everyone. Heck. It may not please anyone. But it may just transform the cannabis debate and open a Pandora’s box of freedom. It could also carry some unintended effects that we should all think about, as well. What does legalization look like if it does pass? How can we avoid corporate greed, governmental takeover, and strict regulatory issues that could take everything that is special about cannabis and morph it into an industry we no longer recognize? It is a discussion that is worth having, so I strongly encourage you to become more involved in the debate. No matter what happens, Richard Lee will have to accept that the definition of compromise is two people being unhappy rather than just one, or in his case many people being unhappy than just a few. In the end, we can only hope that the California voter sees the sensibility in legalizing cannabis and that Richard’s first step is a good one for everyone involved. We must have an open mind and civil conversation about what legalization looks like in the community? The way we want to see that look may give us great insight as to what we need to do to get there and what compromises will be necessary along the way.